Having written a somewhat popular amateur ethno observation blog about the lives of South Asian immigrants in America, there was scope to tell a broader story with wider reach.

How might we create more awareness and empathy for legal immigrants in America?

To design and deliver an entertaining film available for worlwided viewing.

Making movies is a dream for many. The challenges presented by the movie industry are vast and insurmountable for most individuals.

It wasn’t my dream to make movies however. It started just as an experiment for me in 2010 and went on to become the most thrilling entrepreneurial journey of a lifetime- including screenings at the U.S Congress, sold out shows in 35 US cities, and  getting called “Empathy machine” by critics.

Inevitably, I faced all the challenges of a first-time independent writer and filmmaker. To make things more complicated, I was also a complete outsider with no real training in writing or producing movies.

I used design thinking and lean startup to write and produce the first feature film about skilled, legal immigrants in America.

I’ve been on a temporary visa for all my time in the U.S (since 2005). It is estimated that this temporary status can continue until after my death. This fact or its effect is not known to most Americans, including lawmakers. And I was not the only one who struggled to communicate this problem effectively to family, bosses, friends and colleagues. I identified the following segments:

I started imagining some of my blog posts into scenes and running them by my friends, collecting lines that were commonly used in social gatherings as pieces of dialogue, running through scenarios with people to understand how they were tackling the decision of pursuing with their careers and families on a temporary status, anecdotal incidents from people’s lives in the form of a user diary or a contextual inquiry

Within a few weekends, I had a collected a wealth of ideas from talking with people whose life the film would be about as well as my own observations. 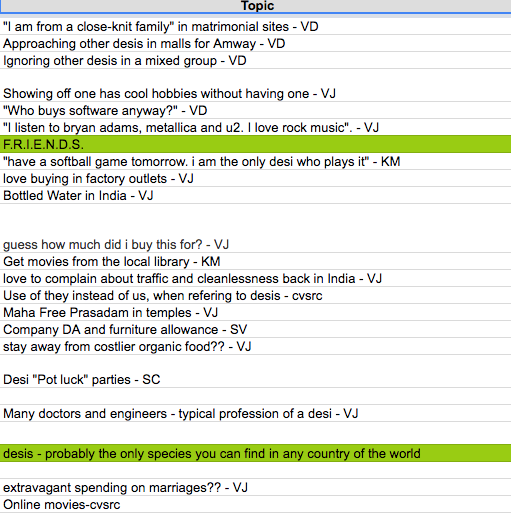 Snapshot of a spreadhsheet where I collected ideas

Some KEY insights that inspired the vision

The various visas that exist automatically provide constraints, mission and motivation for everyone in real. There are 185 U.S visa types and my mission was to create characters that would be authetic and relatable to the broadest possible audience- design for majority.

I used to data to determine that most common types: H1B, L1, F1. To add contrast I decided to have a character that's a citizen with no immigration constraints.
‍

Like with any design, a story could go in many different directions. Based on the interview insights and personas I had I did some "competitive" research of films, stories and screenplays for inspiration simlutaneously generating more ideas and scenes on my own- something like crazy 8s. 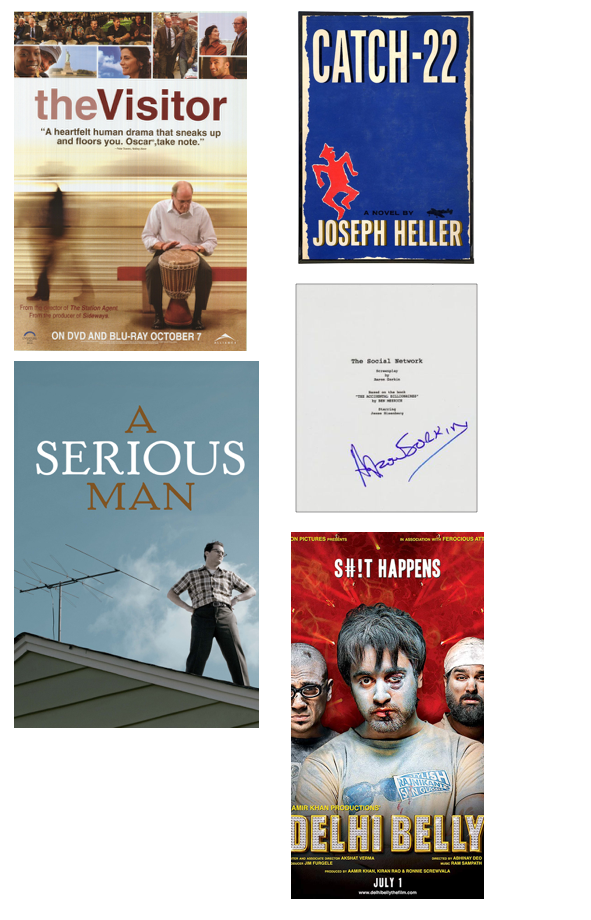 Some of the story designs I researched

Based on my insights and research, I set up some final outcomes for how the story should feel for the audience

This is not too different from how I would setup overall outcomes for, say a checkout design- should be clear to the user what the final amount is, should be easy to modify addresses, minimal form inputs, should “feel” fast.
‍

There were a lot of iterations that went into it but briefly I interviewed screenwriters, read a book and took a class to go from story to screenplay.

The parallels to writing a screenplay and designing a digital product are many.

In fact, as I began to self-educate on the process of screenwriting, I developed an understanding of the screenwriter as the UX designer.

The big difference in an interactive product is that the designer can constantly test and iterate a design with users and act more as a facilitator than the expert.

A screenplay by contrast is more “closed”, where the writer has full control of the user’s journey.

I continued to follow the three act structure based on my outcomes and principles to develop the second and final act of the story that includes the climax.

One highlight of the screenplay was how I was able to use multiple true events (2008 recession, Sikh shootings post 9/11, fake university scams, FBI watch lists) and actual policy research data in the dialogue (green card wait times for Indians and Chinese professionals etc.)

Screenplay is now in the library of the academy in Los Angeles to be used as refrence for other writers.

A FRESH, ENGAGING PORTRAIT OF THE IMMIGRANT EXPERIENCE THAT WE HAVE NOT SEEN ON FILM BEFORE
- Lisa Rosenberg, Lucas Films

A STORY THAT IS GUARANTEED TO CAPTURE THE INTERESTS AND THE HEARTS OF PEOPLE IN MORE THAN TWO CONTINENTS
– Ina Kalo, London Film Academy 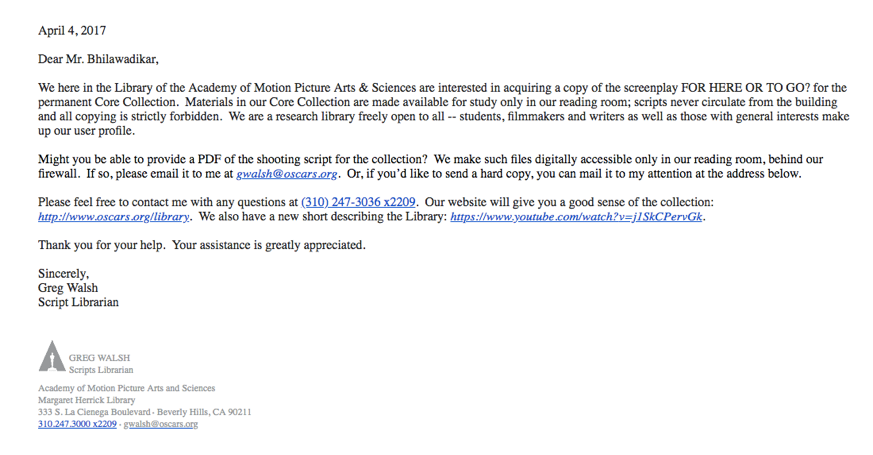 Invitation letter from the Academy

A finalized screenplay in no guarantee for an actual film to be produced.
‍The bound script however allowed me to build the rest of the team and pitch to investors. I resorted to lean startup techniques to operationalize the production of the film.

Validated Learning with MVP for the Film

Since I wanted to tell the story of how uncertainty of one’s immigration status causes existential crisis, the core emotion of the story would have to be ambiguity.

This was important to learn because I could not find competitive examples of films that had “uncertainty” or “ambiguity” as a central emotion.

Would people watch a film about existential ambiguity due to one’s immigration status?

In short, should this product be created? Not only did I need further convincing, I’d also needed to gather validated evidence to pitch to others.

In accordance with build-measure-learn philosophy, we wanted to create the cheapest possible way to convey the existential ambiguity, show it to a test audience and learn from their reactions whether the emotion resonated.

A mini-documentary to pitch the core emotion

This had the essence of many of the ideas and characters in the script- breadth of issues, diversity of people, questions about home and belonging all leading to the core emotion of existential ambiguity.

To gain further tractions with collaborators and investors, the problem needed to be clearly established for everyone. Especially since I had no background in writing or producing, it was important to pitch the problem I was going after rather than the solution/story itself.

The idea was to convey that this feeling of ambiguity was experienced by real people and that a majority of others are not aware of it.

The solution value hypothesis then became that if a feature film existed about this feeling of ambiguity that people experience then it would be easier to generate empathy for the issues to a vast majority of stakeholders (families, employers, students, law and policymakers) because the film would serve to be an authentic media representation on this topic.

Would a film on the topic deliver this sort of “value”?

For question 1, we knew empirically that the primary audience segment we were targeting the film toward (immigrant workers and students on visas), did not have the means to clearly communicate how their immigration status affected their quality of life. Since I am living that very life, it was easy to answer.

Question 3 was a real unknown because there really was no way to gauge the acceptance of an independent film with first time filmmakers. Question 4 was trending positive because of the cast and the crew I was able to attach.

For question 2, I designed another video experiment to demonstrate the demand for the solution. In this video, just the concept of the story was narrated to the audience and then comments were sought anonymously.

We wanted to learn was whether the concept was interesting enough for people to watch a full film on it. Which is what we asked people to comment on.

My team and I were able to fundraise and then go on to shoot the film with an ensemble cast of seven main characters, over 60 locations in America and India and 40 shooting days over 4 phases from June 2013-Feb 2014.

Editing the film was a daunting task in itself with a multitude of creative decisions that had to be made.

Again, I referred back to the principles and outcomes I had outlined during the script stage to use as guard rails for our decisions.

The most interesting aspect was however that the film could have different endings and a few different scenes for the American version and the Indian version.

We created the two different edits and test screened with participants. Screenings were followed by a survey and then a moderated focus group discussion.

This initial feedback and ratings we received were used to iterate further on the edit and helped the team gain creative agreement upon any number of design decisions that had to be made to finalize a scene that included its length, the actors performance, the type of shot, continuity of the story, technical quality of the shot, its placement in the overall sequence of scenes etc. 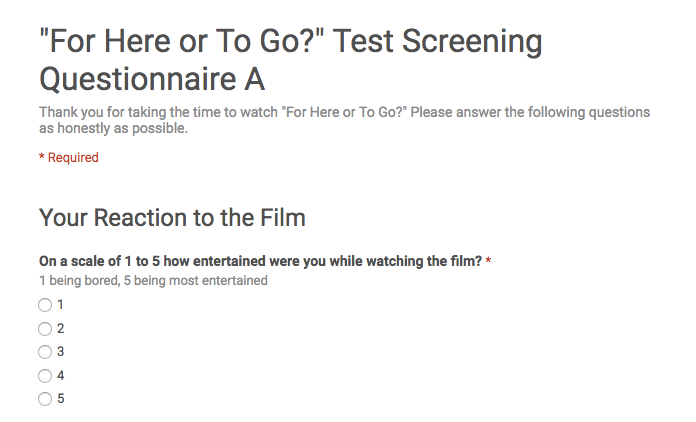 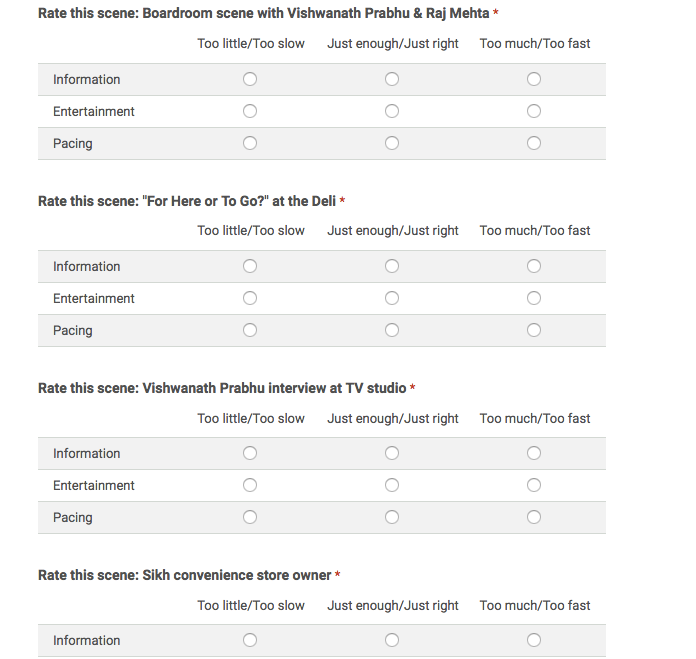 Ultimately, a single edit for both markets was locked in.

As we got ready to submit the film to festivals, this round of testing was all about finding any logical or technical flaws with the product (like jump cuts, subtitle typos etc) and how well the film worked.

Participants were recruited anonymously and through friend networks. They were asked to judge the film based on the outcomes that were set up.

Feedback from the audience was mostly positive and most updates were made to polish up the edit.

The next stages include composing, sound design, visual effects and color correction. Needless to say, similar outcome and testing based process was used to arrive upon the best creative decision for the film.

The film premiered at Cinequest, San Jose, voted America’s #1 film festival. It had 3 sold out screening with over 1700 people in attendance and an extra screening by audience demand.

We documented the audience response to help us go to more festivals and find commercial distributors.

PS: To learn more about my story beyond this case study, read my open letter.

Rare non-studio, independent film to be streaming on Netflix